These latest recommendations show a shift in thinking. Back in 2012, the task force was opposed to routine screening for prostate cancer, a recommendation that resulted in much controversy among urologists as well as The American Urological Association (AUA).

Now, the task force writes: "The decision about whether to be screened for prostate cancer should be an individual one. The USPSTF recommends that clinicians inform men ages 55 to 69 years about the potential benefits and harms of prostate-specific antigen (PSA)–based screening for prostate cancer."

We asked Dr. Michael J. Curran, Greater Boston Urology's CEO, to provide insight on these recommendations, including what it means for patients and what GBU's official position is on routine prostate cancer screenings.

The Problems with the Task Force's Recommendations in 2012 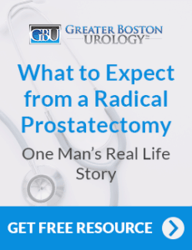 Since 2012, studies suggest an increased mortality rate associated with prostate cancer combined with an increase in the numbers and percentage of patients diagnosed with advanced or metastatic prostate cancer.

In our estimation, the recommendations from 2012 (including the D rating) have put more men's lives at risk. Since 2012 however (and with the help of professional organizations, such as the AUA), we have been able to convince the policymakers in Washington that the D rating, while well-intended, was not helping the cause of men with prostate cancer, and it was having a significant impact in high-risk groups of men.

Thoughts on the Task Force's Latest Recommendations in 2017

Thankfully, the task force did listen to concerns coming from urologists like us and revisited this issue of routine prostate cancer screening. Earlier this month, they revised their recommendations and raised the grade to C.

We think this is a step in the right direction because it's going to get the primary care doctors and the patients back to understanding that getting a PSA check on a regular basis is a good idea.

At GBU, our current opinion is that PSA testing is a very important first step in prostate cancer screening, but it is not the indication on whether a patient should have a biopsy.

We think there's now, in addition to PSA, other testing that we can do for the patient to even further stratify their risk of prostate cancer. Because of the complexity involved, we believe urologists should manage this for the patient, rather than the primary care physician. Our recommendation is the primary care doctor should be seeing patients getting regular PSAs. If the PSA is normal and not rising, they don't necessarily need it every year, with the exception of those high-risk groups, who should be screened every year.

[Note:  If the men are in one of the high-risk groups mentioned above, they should start screening at age 40 and do it every year. Otherwise, all men aged 40 should have a baseline PSA; if it's normal, the next check would be at age 50.]

If the primary care physician is monitoring the PSA and sees the trend of the PSA rising (i.e. they're seeing the PSA get to a level of 1.5 or 2.0), we think that patient should see a urologist.

If you see a GBU urologist, we'll do several things.

Second, we'll implement more complex and state-of-the-art testing for this patient to stratify their risk and decide if they do need a biopsy. This includes providing patients with a Prostate Health Index (PHI), which uses sub-molecules of PSA in a way that is more sensitive to identifying a patient who has cancer. To my knowledge, we're currently the only lab in New England offering prostate health indexes to their patients.

PHI has been very helpful for our patients in counseling. It's helping us eliminate the patient who might have a rising PSA but probably doesn't have prostate cancer; therefore, we don't need to do a biopsy on him at that time; we monitor him closely instead.

In addition to PHI, there are other types of genetic and molecular testing that we can perform as well. When it comes to biopsies, thanks to our MRI program, we can do 3D fusion biopsies.

At GBU, we believe that we can offer patients the highest level of accuracy in getting the diagnosis, and at the same time, a very high level of reassurance that when a Greater Boston Urology doctor tells you that you need a biopsy, that we've done more than just look at one number called a PSA to determine that.

Bottom line: we're happy with the task force's upgrade. If you're a man aged 40 or older, make sure you talk to your primary care physician about prostate cancer screening.

And, of course, if you would like to see a GBU urologist, please schedule an appointment.

HOW CAN WE HELP YOU?